Where did August go? It zipped by so fast and I wish I had gotten more accomplished.
~~~~~~~~~
At least I  finally got all of the painting done in the living room. One of the problems when you do things yourself, at your leisure, is that they take a lot longer. With the painting finished I can now move on to... 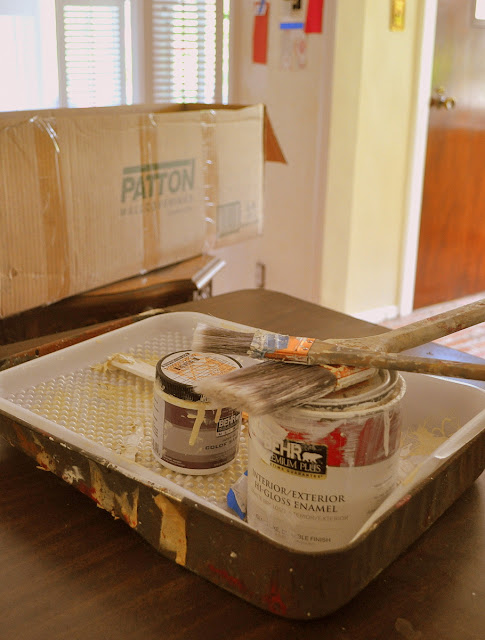 Among the jumble of the room, with all of the furniture pushed together in the middle I made a place for a worktable.  I haven't wallpapered a room this size for a while and I was a bit intimated but the first piece, always the most difficult, went up with ease and so far I haven't had any problems. The hardest part was finding a new wallpaper paste brush, I ended up ordering one on line. 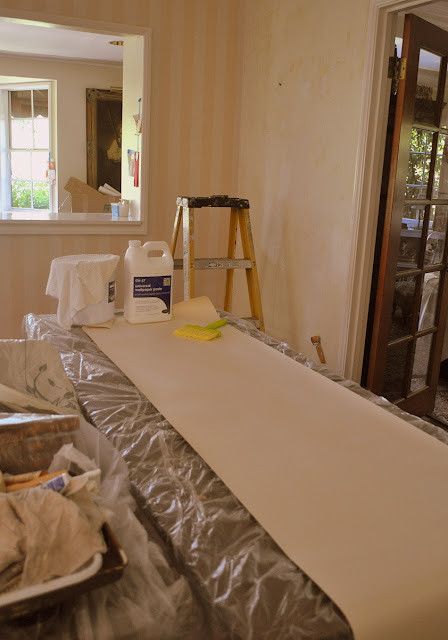 Wallpapering is a very simple endeavor and the paper is forgiving, but there are some things that you need to adhere to. One of these is making sure it goes up straight, especially with a stripped paper such as I am using.  So it is necessary to draw a plumb line every time you turn a corner. There are some fancy devices to do this with but I use the simple method I have always used, a string attached to my seam roller. Don't laugh, it works. 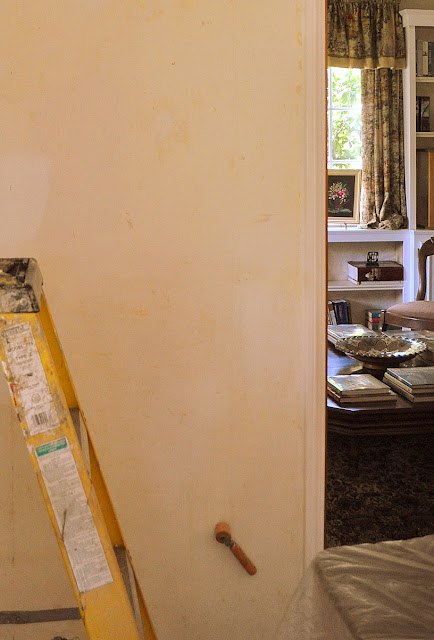 Here are the first couple of pieces. It is such a departure from the elaborate floral I had before. 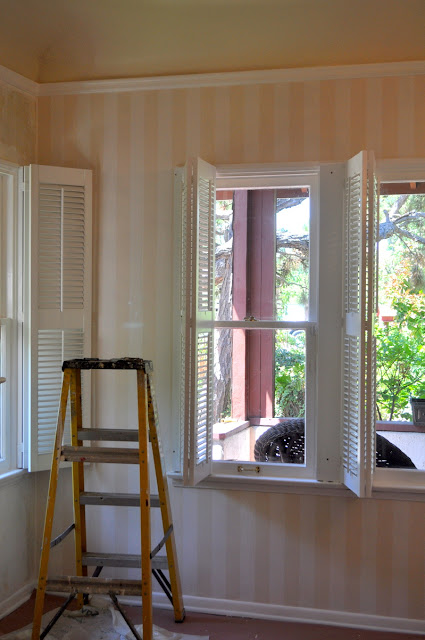 This gives you a better idea. I love the simple elegance of it and the fact that it will go with just about any other color. It looks really nice with the drapery fabric. I still haven't picked out any of the upholstery fabric or decided which chairs I will be keeping. 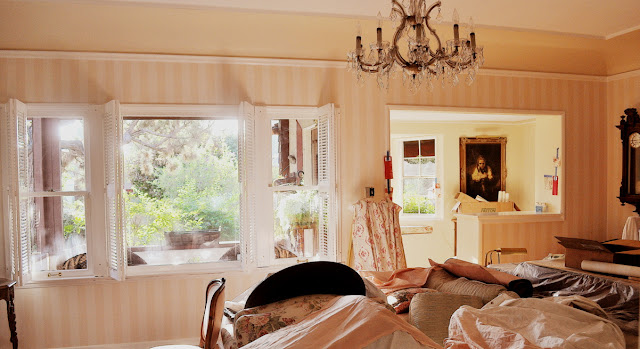 As of today I am past the halfway mark. I hope to have it all finished by next week. Then I will start making the drapes.

Thank you for visiting I hope that you have a very happy day!

Over the weekend my Granddaughter and I went on a short road trip up the coast to Santa Barbara. Our destination was Lotusland, a garden created by the talented, fascinating, and somewhat scandalous Ganna Walska.

The property was purchased in 1941 by Madame Walska, a former Polish opera singer and her sixth and final husband. Their marriage shorty ended but she lived on at Lotusland spending the next 43 years creating one of the world's most famous exotic gardens. Comprised of 37 acres it is divided into seperate spaces featuring cactus, succulents, a Japanese garden, cycads, aloes, ferns, palms, bromeliads, an Australian garden and of course the famous lotus pond. 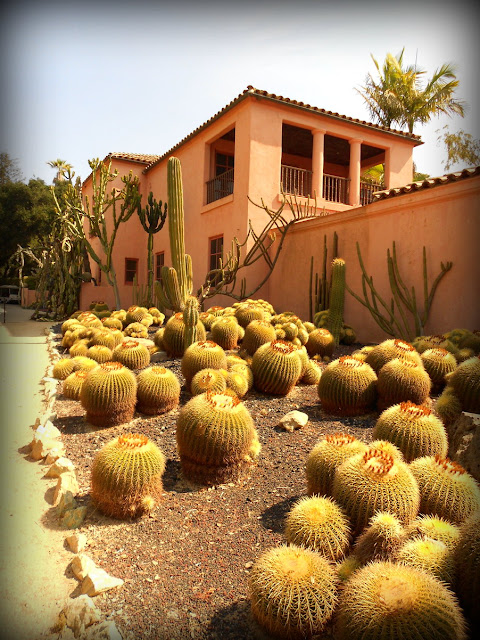 The original house is located in the midst of the cactus garden. 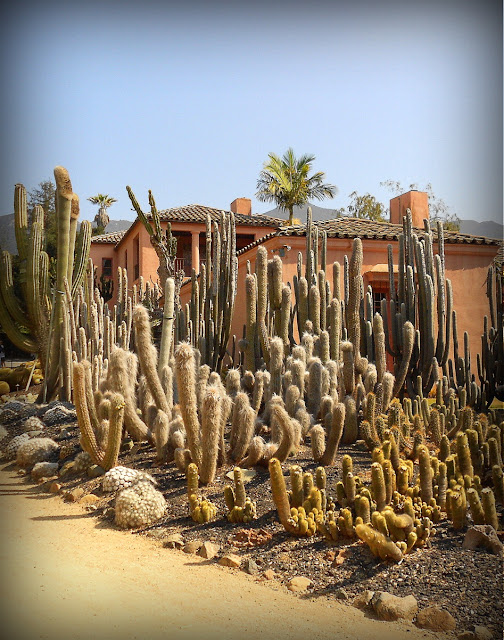 Steps away down another footpath is the shade garden with it's huge baskets of plants cascading in grand and ethereal splendor. 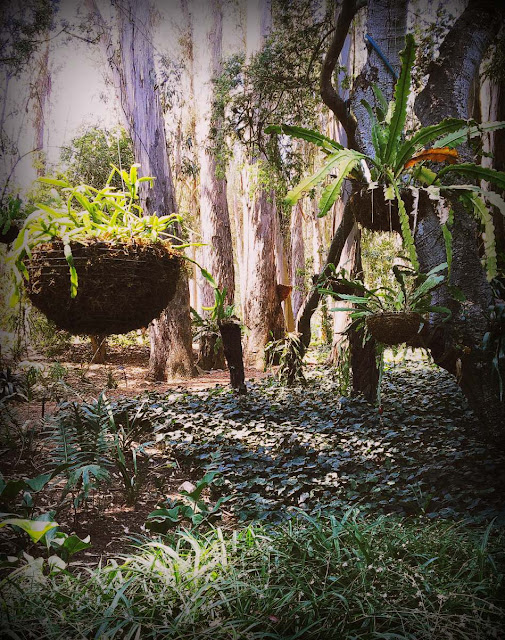 In some parts of the garden you almost expect dinosaurs to appear...

.
...turn another corner and you happen on the lotus pond.

Years ago the original  lap pool was filled in and converted to the lotus pond. The lotus had almost
finished blooming but the sea of seed pods was quite amazing. 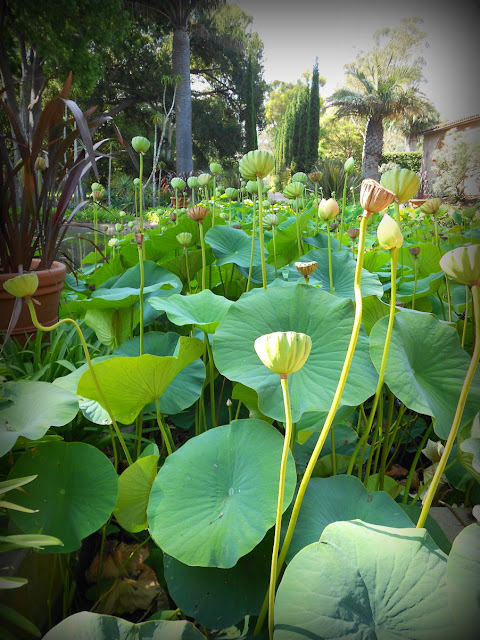 Wouldn't this be a lovely place to have breakfast in the morning or sit in the twilight of early evening. 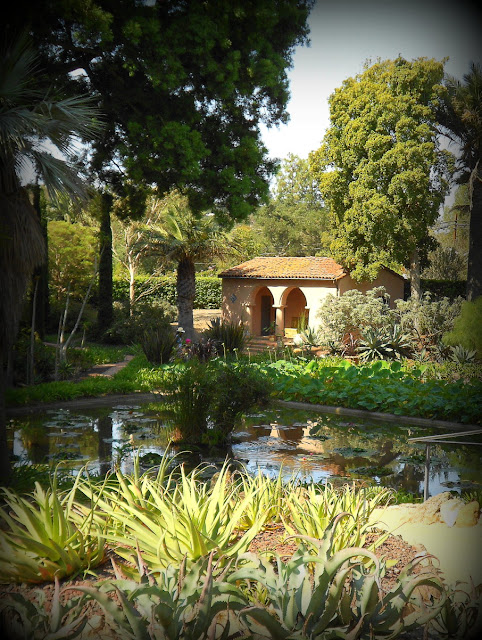 Madame Ganna Walska died at 97 in 1984 maintaining her passion for the garden up until the end of her life. Her last and final creation, the cycad  garden, was financed by auctioning off  her jewelry collection for a reported one million dollars in the late 1970's. After her death Lotusland became a nonprofit botanic garden. It is truly one of California's treasures.

We had a great day!

The pinks of late summer and a ghost story ~ 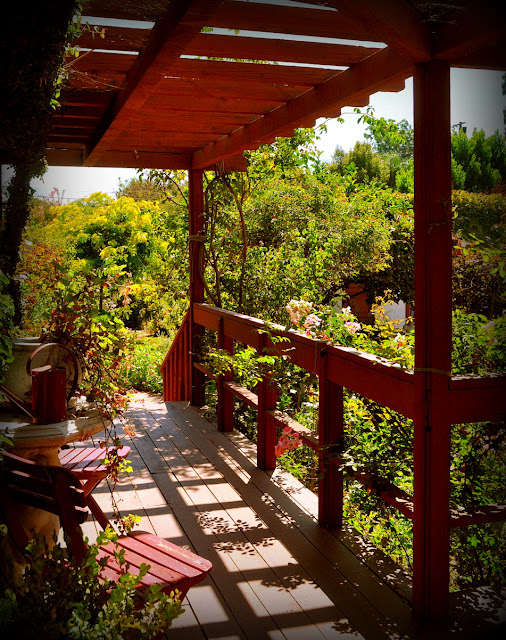 At the end of this deck I got a nasty surprise a few days ago. In the middle of the night I heard the water turn on. At first I thought it was one of my micro-sprinkler units but after ten minutes, the duration they are set to go on for, and I didn't hear the water turn off I knew I had to go out and see what was going on. At 3:30 in the morning this had little appeal. But I got up from bed, took out a flashlight and made my way outside. When I stepped off the last step it was into a pool of water and water was gushing everywhere. It took me a while to figure out that it was coming from a hose. Somehow, someway, the faucet had been turned on full blast. It was an easy fix, I just turned it off. The mystery is how it got turned on.

When I did a Google search the next morning I found several explanations for this happening. The first raccoons. Yes, they can turn on faucets and I do have a raccoon family that frequents the garden. The second, water pressure can build up in an old faucet and cause it to twist itself on. Of course it could have been a ghost, but all of the ghosts here are far too nice to play such a trick.

I will be installing a new faucet, one that I hope will be pressure resistant, raccoon and ghost proof.

And now to the pinks of late summer. 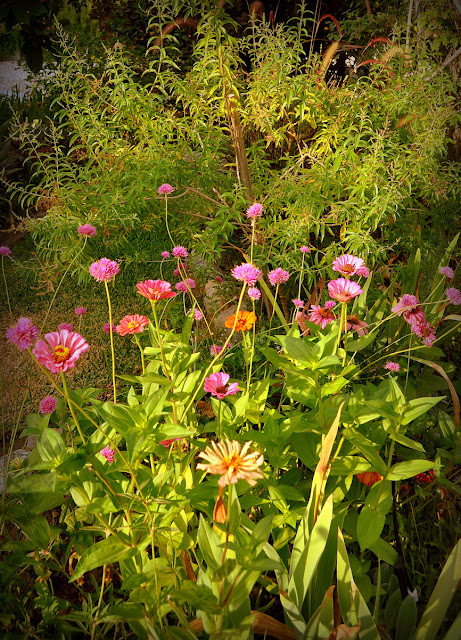 Pink is my favorite color in the garden but rare in the late summer when yellow seems to predominate. However I do have some pretty pink blooms I wanted to share with you.  Above, some zinnias I started from seed, they stand up well to our hot summers. 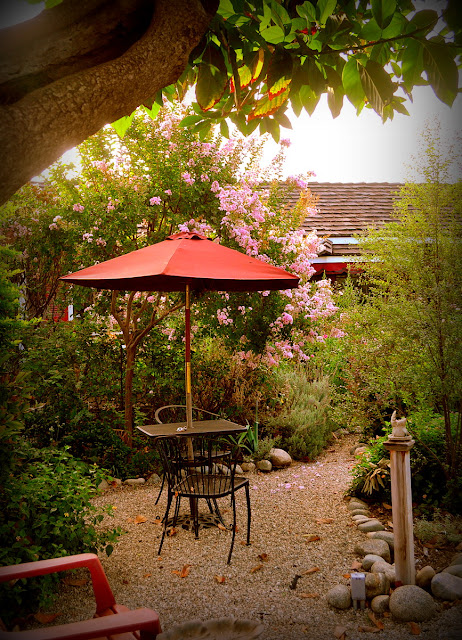 Two Chinese Pagoda crepe myrtles, lovely, and so dependable, one in the front garden and one in the back garden bordering the pond. 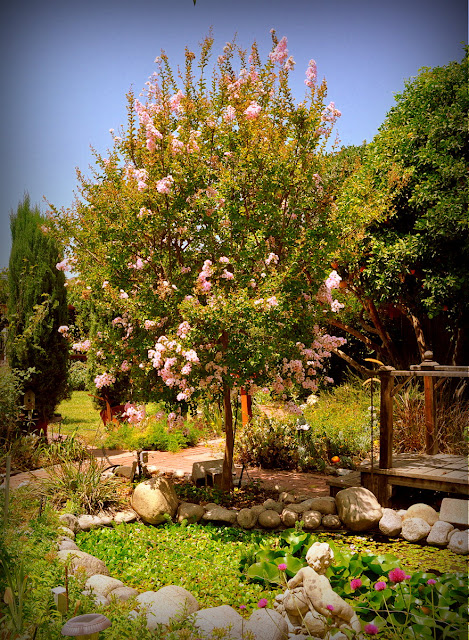 the dahlias, this one just started blooming this week. The flowers are very large and such a luscious shade of pink. 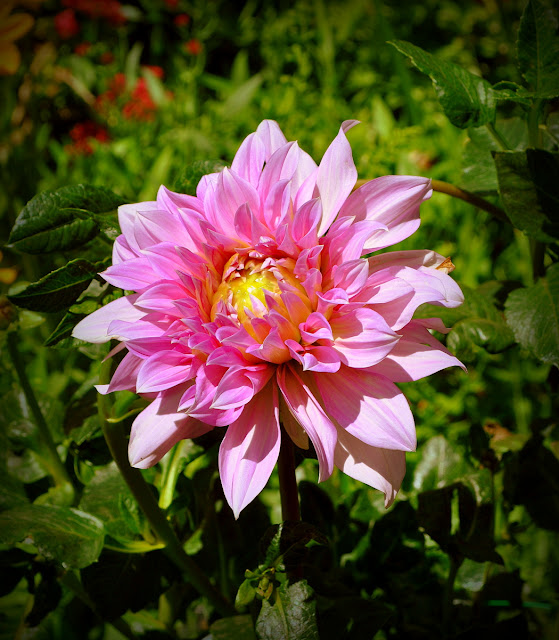 Lastly, with it's puffs of pink bloom the incredible gomphrena, Fire Works. 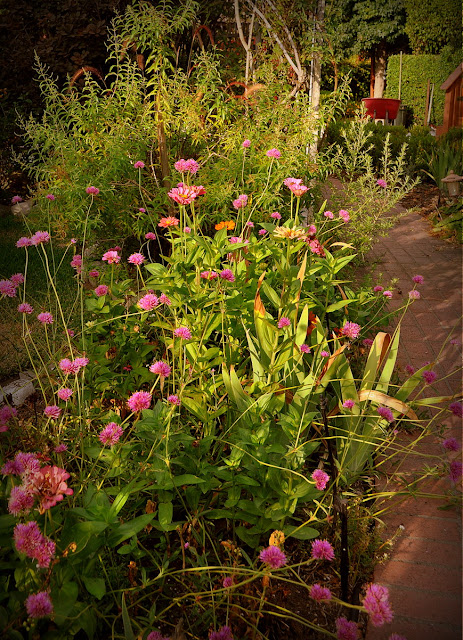 I have also added several  new pink salvias this year but that is for another post.

Along my driveway I have a little cracked concrete area that I originally created for a bench. The funny thing is that I have had just about everything else here but a bench. First I had a decorative wheelbarrow filled with flowers, it was very charming but after a while the wood rotted and I wasn't able to find a replacement. Then recently, a large planter filled with succulents, which looked nice through the cooler weather but didn't really stand up to our increasingly hot summer months.

I finally decided to do what I had originally intended and put a bench here. I found the perfect bench online at Home Depot. It took a while for me to get around to putting it together, not easy for one person alone to do as the pieces were heavy and awkward to deal with, at one point I just sat down and laughed at myself and how incompetent I must look struggling with this thing. 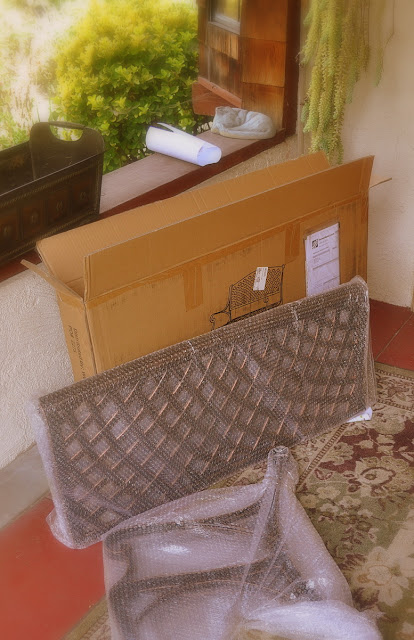 But I got it done and it looks great, so great in fact... 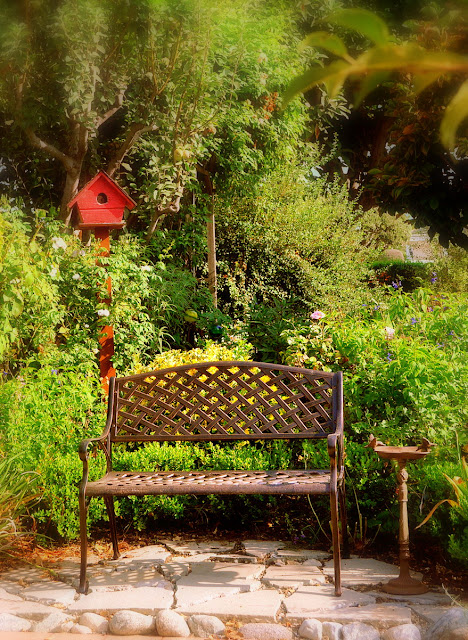 that I ordered another one to replace a rather worn wooden bench I already had in another spot farther down the driveway. 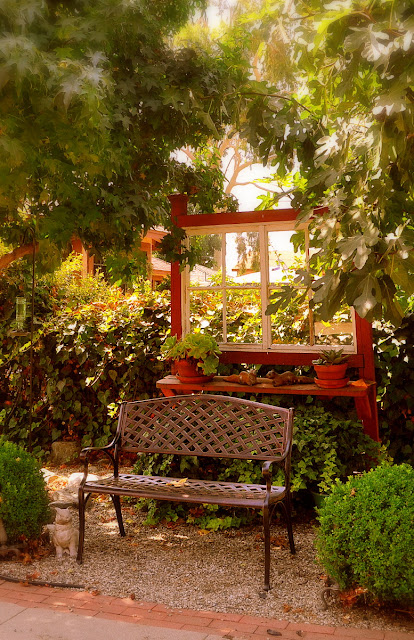 I like the idea that they match and being made of aluminum neither of them will ever rot away or need to be repainted every year.

Visitors to my garden should certainly be able to find a place to sit! 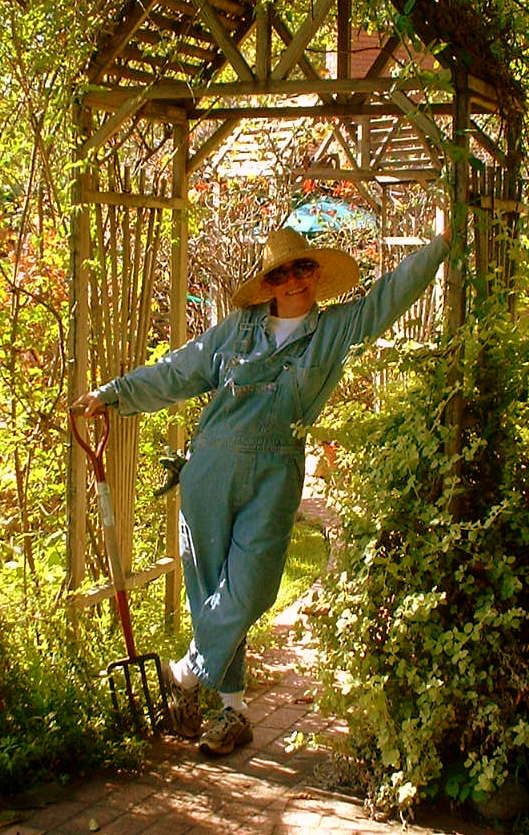 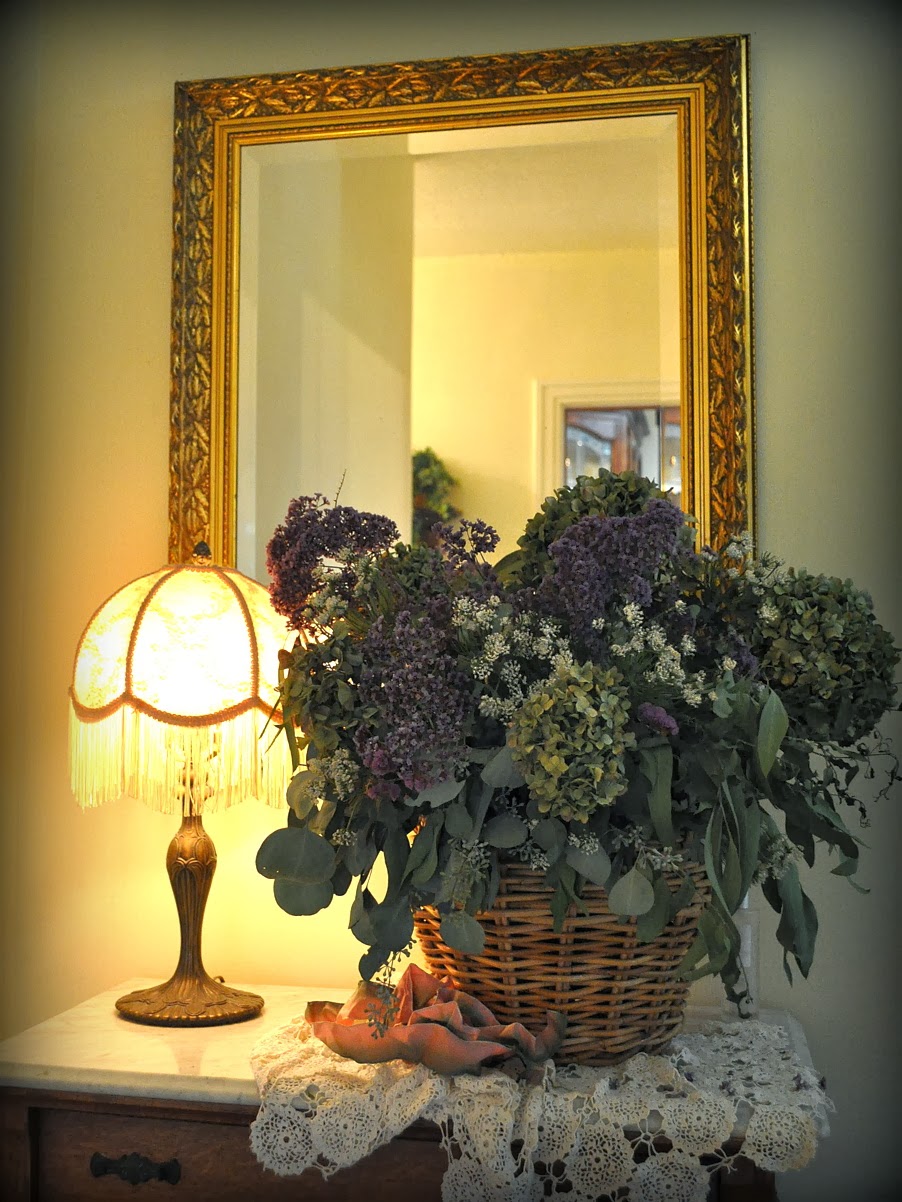 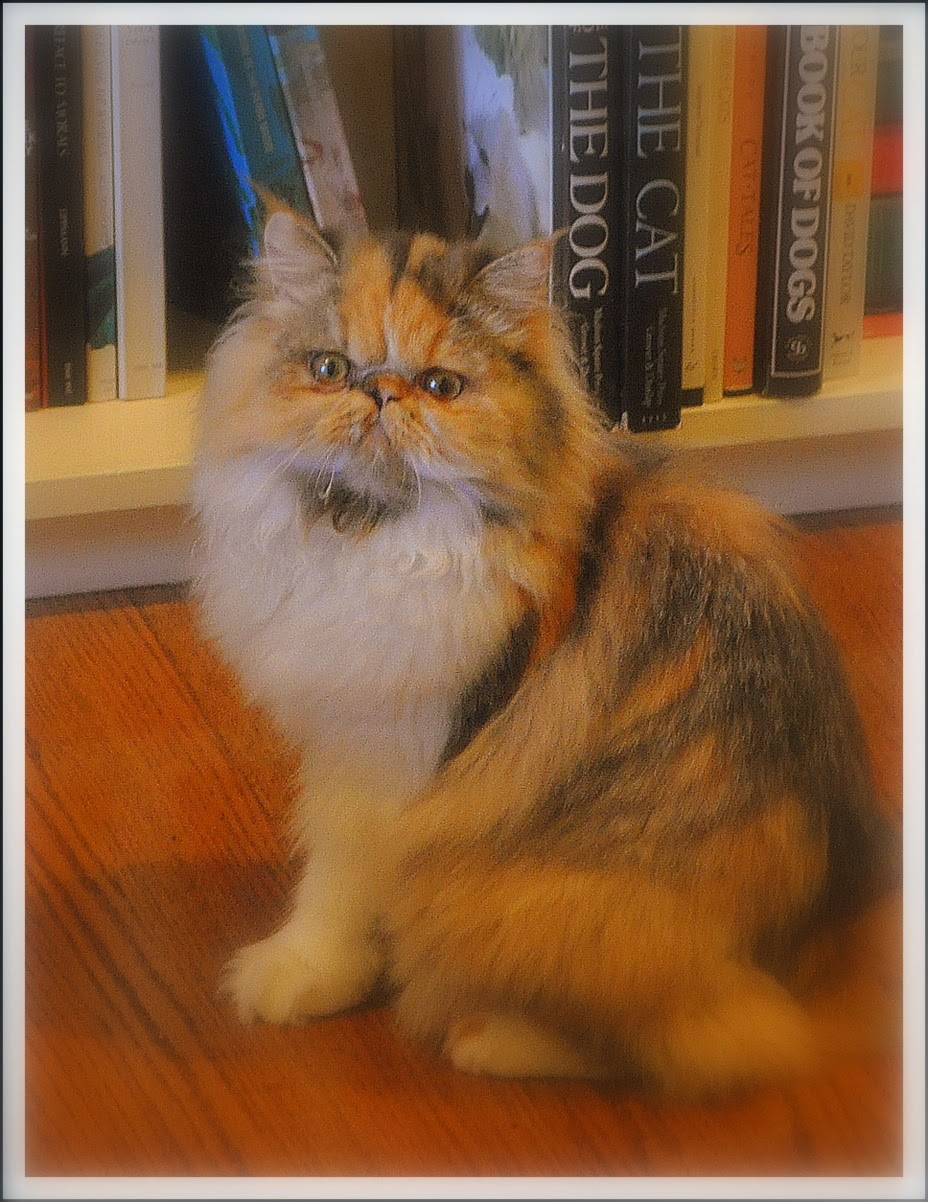 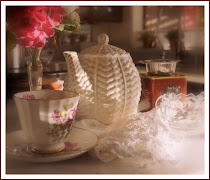 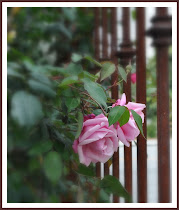 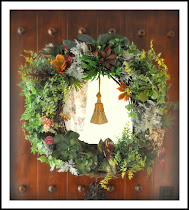 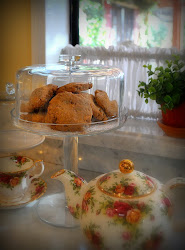